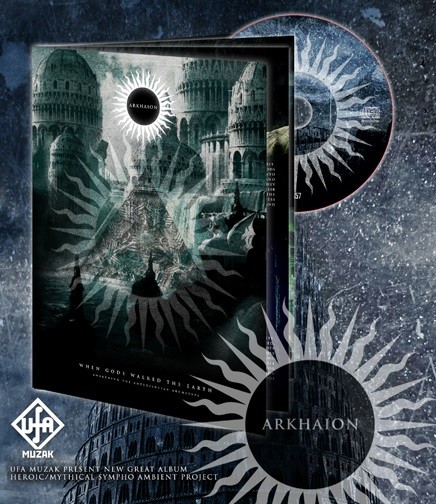 Description Evaluations 0
Description
CDr 8 sided cardboard A5 digifile cover is limited edition of 150 copies. Info: Human history... more
Close menu
CDr 8 sided cardboard A5 digifile cover is limited edition of 150 copies.
Info: Human history is not what is seems for the majority of modern people today. There's no evolutionary and progressive history of development. The primitive modern science can only suppose that it all started about 8000-6000 years B.C. The raven darkness of this delusion is penetrated by other theories which may seem to be completely fantastic, talking about cyclic models of development. 10.000 years before the Common Era humanity was at the peak of cosmic growth and highest development. All myths and heroic eposes, ciphered and allegorical, tell about that times. In those times there was a different race on Earth, now we call them Gods. The great ancestors built gigantic cities, they were developing and lived according to the highest wisdom. This race was certainly of cosmic origin, and they laid the foundation of the whole history on this planet. There were humans like us too, who lived in the same time with the highest creatures, the Gods, and received knowledge from them. First kings described in ancient myths were the offsprings of the Gods - they belonged to the other level and deserved complete worship. Their power allowed them to reach the highest spiritual state, the biggest progress of science of much more absolute character, to build the cities of unseen constructions. The power of human beings came from the Gods who gave them self-consciousness and combined their fate with their own great fate and goal within the Universe. It started 200.000 years ago. Majestic, triumphant and cryptic album of the conceptual project Arkhaion opens up slowly and calmly like movement of a huge body in cosmic space. Everything is undisturbed and grandiose, white light divides in spectral colours and the micro-symbol starts rotating, a mandala containing the new model of the Universe. Ambient and symphonic structures repeat the process of matter efflux from the stars. Immersion in music is like obtaining wings for a short time enough to see the fabulous picture from the bird view. Genetic memory will allow only a few to dive deeper into the visionary space of the Ancient and live some more time there.