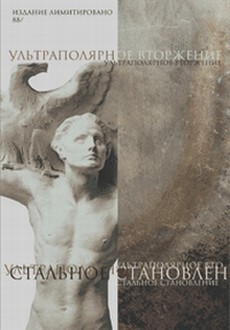 Info: "The one who discovered the knowledge of death too early will not be able to close oneself to it..." The album "Formirovanie Ne-Smertiya" ("Forming of Non-Deathness") is a profound Decree of Peace, where death acts as an anonymous party, a path for the chosen and obsessed ones, near the walls which noone should break, because what lies beyond them is not for humans. The front localizes souls, depriving their carriers of all that belongs to those left after the war, so the game rules mean something different here. Both stake and gain in this game are unknown. About the album. Roughly sewn from the skins by coarse sinews of corpses, digged out from the desecrated mound, all in soil and slimy swarming worms, it was confiscated and brought to the autopsy table, this mistake was understood and even the most faithless ones crossed themselves, they filed it under "music" and hid themselves to wait for the darkness cherishing a dream of self-asphyxia. A host of screams, yells, wailing, praying, groan came out of the mortuary with the songs of this Russian project. Rough heavy slabs of ambient, noise and post-industriall fall over one's head leaving no room for doubts "if hell really exists?"