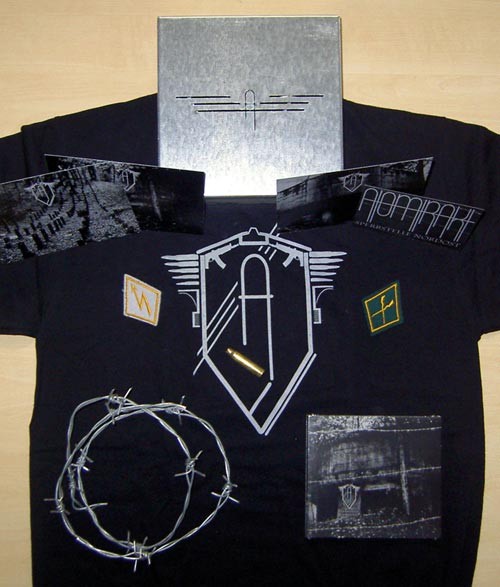 This is the special metal-box including CD in 6-panel-digipak, barbed wire, cartridge cases, old patches of the Swiss army, a T-shirt (size XL), a sticker as well as 3 postcards limited to 100 copies.

Info: wo years after the highly acclaimed „Nuklearchetyp“ album the mighty ATOMTRAKT are finally back with a new release which is entitled „Sperrstelle Nordost“. Without exaggerating, this new opus will set new standards in the Apocalyptic / Martial Industrial scene: Words like “bombastic”, “martial”, “heroic” or “militant” definitely need to be re-defined. The atmosphere of “Sperrstelle Nordost” is threatening and cold. It leads the listener back to times of war (WW II and Cold War) and truly hits like an atomic bomb. Cold, heroic and atmospheric synthesizer layers are mixed with bombastic drums and military war-like rhythm patterns. The vocals on the new record vary from dark and clean to distorted and threatening. “Sperrstelle Nordost” is a conceptual album dealing with the situation of Switzerland in the 2nd world war / cold war. “Sperrstell Nordost” is an area in Switzerland which was of national importance for the entire country during times of war. The overall sound of the album is powerful and quite bombastic – it spreads a superior and mighty atmosphere rarely heard before. The lyrics deal with fears, death, decay and ambiguity. When listening to this sophisticated album, you can find yourself at the border fighting for your country. The album itself never gets boring. This is due to the variety of songs and themes. The sporadic use of acoustic guitars sounds very interesting and even brings the songs to another level. The last track of the album (“Trauermarsch”) has a pretty psychedelic touch and sounds like if soldiers walk through deserted snow-covered battlefields.
Definitely one of the best and most powerful Martial-Industrial-Neoclassic albums EVER!!!