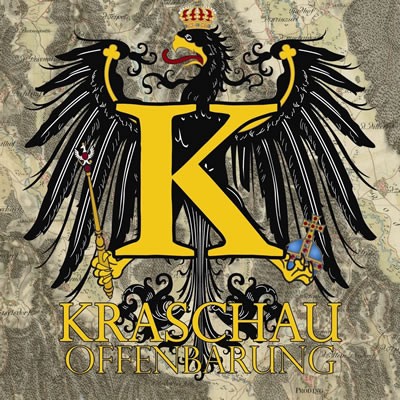 Debut CD comes in nice digipack.
- new project from "Durch Heer und Kraft" -
Info: We are proudly to announce the debut album of a promisse in the musical scene. If you like bands as Triarii , Arditi , March of heroes etc....you are in the right way with Kraschau !! The debut album of Kraschau was inspired by the great empires and kingdoms of Europe, like the Austro-Hungarian Empire and Prussia and also 20th century christian and legitimist movements, eg. the Falange or the Carlists of the spanish civil war or Romania’s Legionary Movement. The lyrics are dealing with the themes of christian mysticism and the spirit of struggle - as opposed to the coward comfort of the modern world. The album features various guest musicians from the hungarian industrial and neofolk scene.

Kraschau was built upon the ruins of Adam Berces’ prevous martial-neofolk project, Durch Heer und Kraft. The aim of this new project is to create high quality, live sounding neoclassical/symphonic music with the strictness of martial rhythms and with the power of industrial sounds. Adam was trained as a classical musician on trumpet and trombone, that’s why brass instruments has a big role in Kraschau’s music. It also incorporates various speeches, which are not too common in the martial-neofolk genres collected from documentary films and historical archives.