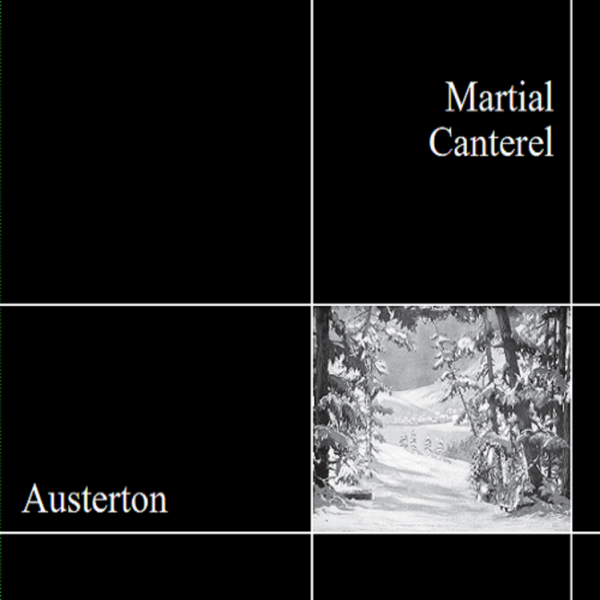 Peripheral Minimal Records is proud to present - and for the first time on CD - Martial Canterel's second album [ "Confusing Outsides", being the debut ] originally recorded between August and December 2003, "Austerton". The CD is limited to 300 copies in a Digipak. The artwork reflects the original sleeve [ first released in 2005 ], beautifully redesigned by Oleg Galay. The album was digitally remastered by Martin Bowes @ The Cage Studios

New York resident and one half of Xeno & Oaklander, Sean McBride's first full length LP gets the CD treatment. As a bonus it also contains an unreleased track only available on this album, "Disappear". He began under the moniker Moravagine before he started releasing limited edition cassettes and playing Brooklyn dives as Martial Canterel in 2002.

Since then, McBride’s bleak intellectual exercises in the dark and danceable have flooded North America and Europe through the frosty fairwaves paved by Pieter Schoolwerth’s Wierd Records. With an inimitable minimal style merging bright, urgent melodies ornamented and punctuated by the noises of industry and McBride’s sonorous, stern vocals, Martial Canterel’s earlier releases [ "You Today", "Refuge Underneath" ] have garnered both critical acclaim and a rapidly growing rabid fan base. Sean is also one half of the duo Xeno & Oaklander together with Miss Liz Wendelbo.

The album "Austerton" consists of some of his earliest work recorded in 2003. The ten minimal synth songs on the LP are reminiscent of music by bands like Dark Day, Snowy Red, A Blaze Colour and League Of Nations, or even at times early Depeche Mode. Through the collision of a uniquely humanistic means of production via live analogue synthcraft expertly paired with vocals and lyrics that reflect the pitfalls and pleasures of our age, Martial Canterel provides a visceral kick best felt on the dancefloor, amidst a flurry of flesh in motion.