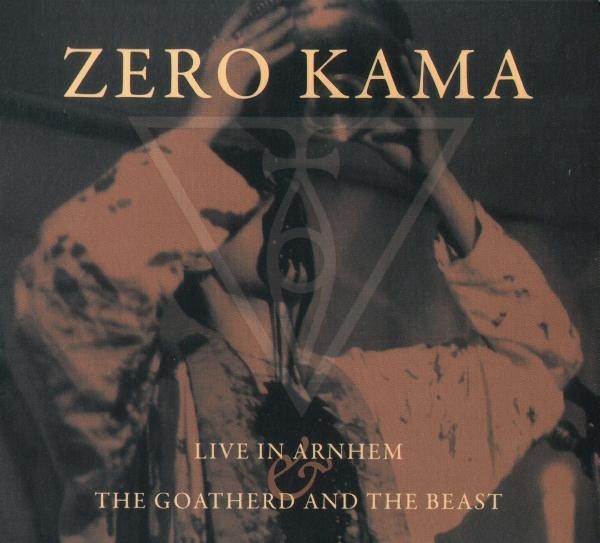 Description Evaluations 0
Description
2CD comes in a glossy cardboard gatefold sleeve. Info: Michael DeWitt’s Zero Kama was the... more
Close menu
2CD comes in a glossy cardboard gatefold sleeve.
Info: Michael DeWitt’s Zero Kama was the precursor of the ritual and majick inspired music scene with bands like Coil or Psychic Tv. Their label Nekrophile was a big influence on many individuals and also for the creation of Athanor. Zero Kama did only two performances, in Amsterdam and Arnheim. This last one being presented here for the first time on CD. In concert, Zero Kama’s sounds was quite different than on their only studio album « The Secret Eye of LAYLAH ». They used accoustic instruments aswell as bass and guitars. For this concert Zero Kama were Michael DeWitt (concept, tapes, voice, bone instruments, shenai, violin, percussion), Muki Pakesch (tapes, guitar, bass drum), Didi Neidhardt (bass, bass drum, congas, percussion), David Aranyos (bass, bass drum, voice, percussion),Wolfgang Lehner (super-8 film and slide projection). Live mix by Martin “the Viech” Wich. The Cd also features the interview Zero Kama did for Stad Radio in Amsterdam 1985 As a bonus CD we added the rare tracks Zero Kama did previously to the legendary Secret Eye of Laylah LP released by Athanor as a ltd edition 10". It includes the track Liber AL I.13 based upon a verse from Aleister Crowley's Liber AL vel Legis or The Book of the Law, this track is the only remaining part of a later abandoned project in which Zero Kama intended to set Crowley's Liber AL to music. Other tracks, like "Prayer of Zos", are based on the writings of Austin Osman Spare, whose Zos Kia Cultus was another major influence to Zero Kama’s work. Both CD were remastered by Andreas Resch and packaged as a 6 pages digifile with archives photos from the concert. This will proceed the CD re-release on Athanor of The Secret Eye of LAYLAH from the original master tape.

The Goatherd And The Beast: