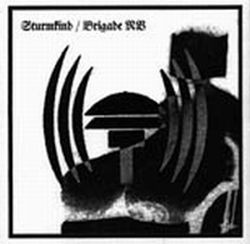 Description Evaluations 0
Description
SET: CDr (70min) + A5 handmade book + poster is limited of 100 copies Info:There are still,... more
Close menu
SET: CDr (70min) + A5 handmade book + poster is limited of 100 copies
Info:There are still, the musician, that nobody anbiedern. Rarely have I Tondokument get into the hand that so consistently denied the consumer. What seems unknown band of listeners on a 70 minute long piece that consists mainly of bare crash with minimal variations? A little courage or megalomania already heard about this. Sturmkind / NV Brigade want to confuse you and that is certainly succeeded. With the strange abstruse texts of the manifesto leave the reader baffled. Whilst some antimodernistische attitude herauszulesen, but what it really is, just understand sociology students in the 23rd Semester. Pamphlets found extracts of the introductory part of the CD that a woman's voice in the style presented by Maria decay. After the lady with the words "The Brigade NV is the freedom" ends, breaking the inferno started. Those who have not yet been employed with Bruitismus, which should be at this point. This at the beginning of the last century avant-garde music emerged declared the noise to the instruments: "... we orchestrate the sounds in the spirit of Metallrollos before loading windows, doors zuschlagenden, Schlürfen and urging the crowd, the mass unrest of railway stations, steel works, factories, Printing presses, power stations and underground railways ... " (Russolo). Sturmkind / Brigade NV seem to see this tradition.About a sinusoidal low-noise and abschwellenden a gigantic machine rages a wild electron tower. Occasionally, metallic percussion noises and distorted voices from afar to hear. This is not music. There are no harmonies and other unnecessary ballast.Technology alone determines the aesthetics. Who is a small man with headphones this agony extradite receives almost unnoticed a relentless brainwashing. In times of universal 24-hour day at 7-days-the-week manipulation can only be useful, from time to time a format c: / to ...