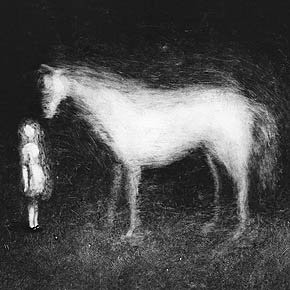 LP limited edition of +/- 300 copies.
Info: Le Syndicat Electronique new sideproject !
fter the wonderful „World In A Tear“ LP released earlier this year on Cititrax/Minimal Wave, Treue um Treue are happy and proud to present the second album by BRUTA NON CALCULANT, thus resuming their collaboration with the French duo of Alaxis Andreas G. (once known as Le Syndicat Electronique and mastermind of Invasion Planete) and his blood brother V-Y (Age, Swesor Bhrater, De Frontanel). >From IOSOPHIS to SHINY BLACK MATER, many eclectic projects have charmed and surprised us since Alaxis Andreas G. made his discreet reappearance on the musical scene. But none has had the fullness, maturity and deeply unique musical voice of BRUTA NON CALCULANT, which appears as a sublimation of all that has come before, like the completion of an alchemical Great Work. Leaving behind the folk elements present in World In A Tear, this new album blends with instinctive ease hypnotic third wave rhythm box beats, big muff fuzz and esoteric lyrics into a masterpiece which is both lyrical and intensely ritual, drenched in this aura of mystery characteristic of the brothers’ recent works. Thematically inspired by the myth of the wolf-woman, La Que Sabe (“the one who knows”) is an album about initiatory death, the passage through the wolf’s cave leading up to spiritual rebirth and Liberation. It proves Alaxis Andreas G. to be one of the few contemporary artists capable of constant renewal, each new step on the musical path as thrilling as ever. Comes with a superb artwork by Sophie Lécuyer.