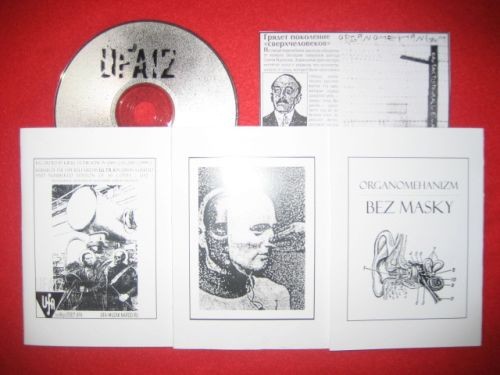 CD 5 track(60min) + Insert in special handmade cover is handnumb. and limited of only 113copies.

CD in the clever envelope from the cardboard.
Old school Industrial one of the founders standing with the springs Petersburg of the old school Cyril Stukalin, the participants incredibly REDUCTO AD ABSURDUM the fight comrade puts the most varied, complex and barbarian noise before after with front, in particular, on this collection / album.
early was realised the material in the minimum edition on the cassettes by the label EXTREMIST in 2001, but has not got the belonging distribution.
the analogous dampness recording which is overcrowded by the fears, the presence and In from the microcosm.
Classically of the first wave in the anarho fascistic cocktail: of the hunger, the return of the myth and the cultural bankruptcy.
by the curtain of the compositions go the subjects: In the " Kolonisierung of the moon to identify the special network, to determine not the possibility which that with the way on this culture thus to have an effect.
Humanely in the role in the social plays, and in the only attempt - without remaining mask.