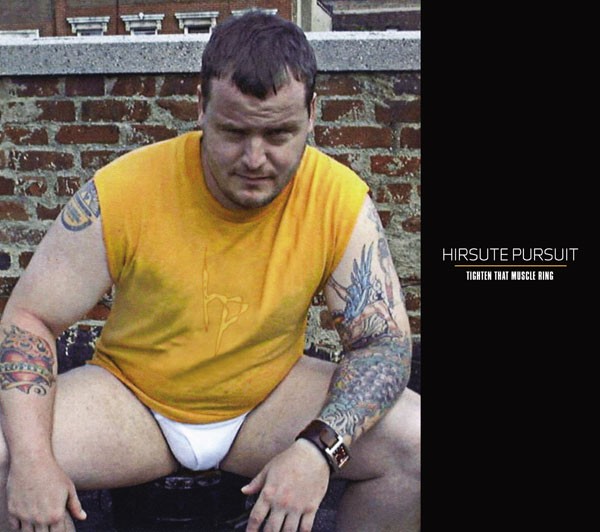 Music that smells like a man!
“I play Hirsute Pursuit at all of my DJ gigs” (Peter Christopherson)
“Tighten That Muscle Ring” features collaborators such as Bryin Dall of Thee Majesty, Boyd Rice of NON and Sleazy of Coil / Throbbing Gristle. The music is real. The sex is real.
Created by Harley Phoenix and his musical partner, Bryin Dall, this is Gay Sex Music that offers no apologies. Enticing rhythms combined with raw sex and a commanding, deep, resonate voice, Harley has transformed explicit instructions for serving his pleasure into a musical orgy that hits the gay community where it plays, the dance floor and the bedroom. Sleazy dance beats pound along at tempos that encourage carnal exploration, while sounds of ecstasy cannot be ignored. You will be thinking Cock Thoughts (a song from the first album, That Hole Belongs to Me).

After starting with a MySpace page Hirsute Pursuit has become THE MOST PLAYED GAY MUSIC ON MYSPACE. Typical letters from fans tell Harley that after listening to his music, they HAD to go “get off”. While fans have been pleading for photos, Harley refuses to give in. Understanding the restraints of reality, Harley remains in the shadows, making Hirsute Pursuit the ultimate in musical fantasy.

Without any publicity or releases, Hirsute Pursuit has had over 140,000 plays in less than a year! Drawing fans from all musical genres, including House, Country, Rock, Hip Hop, etc. Primarily attracting a gay audience, recent fans also include female dominatrixes, middle-class housewives and straight guys (as is evidenced in the video, Boys Keep Swinging featuring Boyd Rice and James Pope, both straight). The raw sensuality has now crossed over into the heterosexual domain.
This is music you can fuck to, as well as bump and grind.
Harley Phoenix is currently preparing Hirsute Pursuit’s live show experience which will include actual musicians, dancers and video to give the audience members a complete sensory explosion.