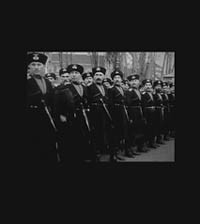 Description Evaluations 0
Description
CDr 28min, cardboard envelope + 2 postcards is limited to 88 hand-numbered copies. Info: The... more
Close menu
CDr 28min, cardboard envelope + 2 postcards is limited to 88 hand-numbered copies.
Info: The label is a new release, which resulted from a concert held in Yaroslavl, 04.15.11. On this CD is a complete piece of performances of the Moscow project Dasein. It's a cold, angry, but internally a bright burst of noise in the space where he stood, so that it could consider and understand. More than half an hour, the powerful raging stream, within which there is nothing that could be called an ordinary or trivial. The nature of the project is the sound that immediately enters the person into a state of altered consciousness. It quickens the heart rate, increased visual acuity and increases the amount of adrenalin in the blood, the entire hearing focuses on the psycho-physical affect, and soon, he loses orientation in time. What does it do? As a concept, this action is taken concrete historical passage, and a deep understanding of its essence and presented the experience of thinking of transferring from the objective reality of the deep movements of the past. "Bayonets in the ground!"
***- RUSSIA - IMPORT -RARE ***