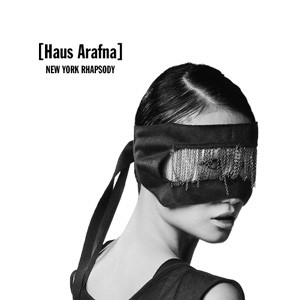 New York Rhapsody is no typical Haus Arafna album. It has already celebrated its premiere in 2009 at the New York Fashion Week. New York Rhapsody's composition has been kept more open than the previous Arafna releases. Not aggressive, but because of this, particularly darkling in nature. The album is striking because of its ritualistic traits, with which it displays the Abyss through the use of commonplace devices such as analog electronics, metal percussion, and unusual vocals.

This is no typical Haus Arafna album. It has already celebrated its premiere in September 2009 as part of the New York Fashion Week. Haus Arafna had accepted the offer to create the soundtrack for a show featuring the fashion designer Katie Gallagher. Somewhat of an unusual venture into a new environment, and in front of a new audience, this was obviously an exciting challenge for creative artistes, and for "Industrialists", considering the extreme style of expression, a very pleasurable experience. The emphasis laid on the various elements on this album is different to that of the earlier releases. That is why Haus Arafna has preferred to delay the issue of "New York Rhapsody" until after the release of the "official" album "You". Angst-Synthesizer, raw electricity, metal percussion, artfully reduced electronic textures and unusual vocal performances combine into a "sound from the Abyss" with deep ritual undertones. No sign of "Screams’n’Shouts" here. Instead Haus Arafna has created Angst-Pop hits and Industrial Monsters with an extra dose of darkness, almost as if the March into Destruction has to be sweetened somewhat. Well-dressed, of course...