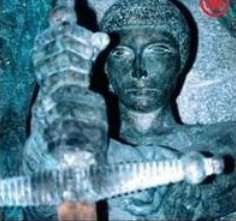 The pressing is limited to 880 various shades of red coloured vinyl copies, coming in a red foil-blocked gatefold sleeve, 400 of which will also come with a bonus 3 track picture disc 7" featuring live tracks from the 5 track CD/12" single originally released in 1993.

Please note that the actual recording of the track 'Cathedral Of Tears' is exclusive to this album and bears no resemblance to the recording of the single version of the track released in 1993 and is also featured on the 'DISCriminate' double CD compilation. Please also note that 'Brown Book (re-read)' and 'Brown Book (Whiphand 6 version)' have never before been released on vinyl. Both tracks were specifically remixed/recorded for the CD version of this album in 1991 and 1998 respectively.