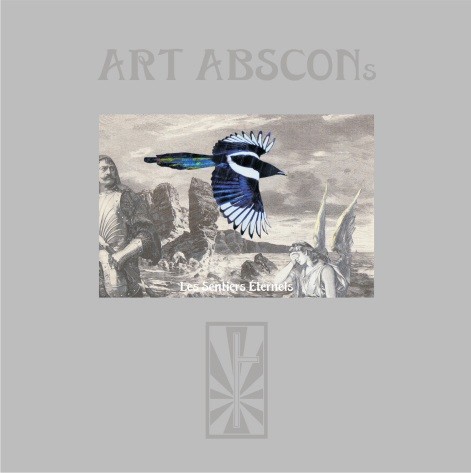 LP is limited to 150 copies in embossed die-cut thick grey rough carton cover,with full-colour picture in the centre · attached full colour 12" info sheet · in an attached black special paper original fronte nordico cut-out inner sleeve transparent blue vinyl
Info: Fronte Nordico is happy to present its second release from Art Abscons, one of its most favourite current neofolk projects. «Les Sentiers Éternels» is a brand new album including 10 tracks finished and mixed in early 2012. This work took about one and a half years in the making and shows further development both in technical refinement and the creative side of the project. The genre borders of neofolk are broken and we see here a varied mix of many style elements – from pure dark folk guitar ballads to more eclectic conceptual tracks close to something which could be defined as kraut-rockish psychedelic industrial, from electro-pop / minimal wave tunes to harsher and more aggressive pieces. The album was produced according to an innovative recording technique called «Stereo Spektraland is the first album to feature the SPEKTRALOPHONE, a sort of organic synthesizer developed by Art Abscon himself. «Les Sentiers Éternels» also brings Art Abscons' spiritual kinship with American neofolk project Gnomonclast to a new level and contains various noteworthy contributions from N2 ItinitI and Sasha Feline. This album is a kind of sounding universe strictly based on the principles of Abscons Magik and N2 ItinitI's cabalo-gnostic achievements, and, thus, includes any contradictions the real universe presents us with. There's everything here – Sun and Moon, Day and Night, Love and Hate, Joy and Grief, all act according to the hidden principles eternal, and this work is the most omplex and intellectual to be found among Art Abscons albums until now – the literal and accurate revelation of the Hidden God – a pure excitement to the intelligent listener who is into occult matters! The cover artwork for the album was done by famous German artist Reiner Langer.