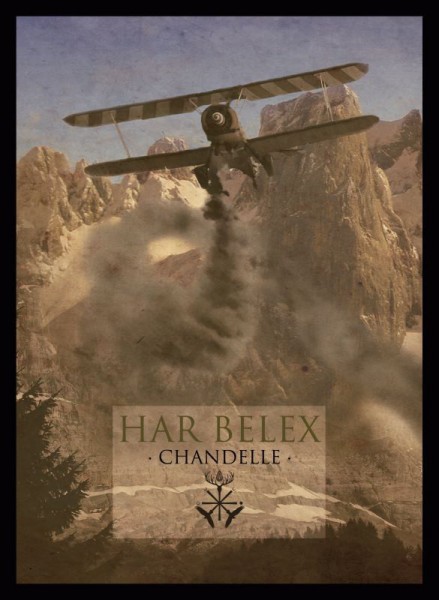 
CAUSTIC RECORDS presents Limited edition DVD-Sized Digipack with 16 pages booklet!
"Chandelle ", the debut album of Har Belex. In this work Manix S. and Salva Maine (CULTURE KULTÜR) present acoustic guitars in a pure dark folk style, classical guitars with a decadent and Mediterranean aura, vocal melodies emanating beauty and longing, brought together with excellent strings, percussions and arrangements. The many references in this work, both musical and conceptual, make this album a perfect fusion of tradition and modernity. With a perfect musical performance that is melancholic, ethereal, beautiful, and exquisite taste, it's amazing how Har Belex’s music stands triumphant above the ruins of our sick and worn out civilization in order to rescue emotions we thought buried under layers of technology and absurd ideologies. The horror of the hum of the German Junkers and Heinkels devastating the Spanish town of Guernican (during Spanish civil war) joins the terror of soldiers (mostly children) forced to be exterminated by the will of the powerful in Annual. While fools die in no man's land, the goat celebrates all its misery and splendor in the Akelarre, being softened, thankfully, by the balm for the soul that penetrates deep into the dark forests of the North hand in hand with mythological beings of creepy face and gentle heart, and ending in a burst of pure spring FREEDOM. Talent is oozing from these SONGS, with a capital S, drawn from the hearts of musicians who believe in themselves and have made an album of pure NEO FOLK with traditional touches and splashes of Dark Wave and martial Pop sounds, rescuing the lost common soul of Europe with texts in Spanish, English, German and Basque language.