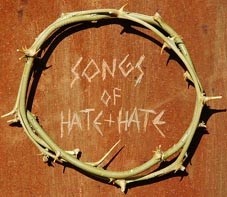 Colaborative release by those 2 primer German / US art-dark-folk projects. A lovely bounch of superb Noir-Cabaret charming songs. The songs comprising "Songs of Hate + Hate" were solitarily composed and authored respectively by Art Abscon, J1 StatiK, and N2 ItinitI. In the span of one week, having met in Abscon, the three made record of these disparate compositions and agreed to ceremonially burry several corpses by way of lyrical effigy.
It had long been their ambition to speak clearly; that their meaning be readily understood. In the plainest words, their "Songs of Hate + Hate" are a praxis for what is to come and a faithful record of what came before; as was once sung in song: "Do this for love, but first honor hate" [Luftwaffe, Ere I Perish]. These songs are dedicated to those who would profit from borrowed accomplishments, but have nothing of their own to create. Art, J1 and N2 give their assurance that from their words and signs no theft will bring benefit.
For after the last lie is redacted, what remains is often unkind. The jackals and hyenas know who they are; this album is dedicated to their dishonor.