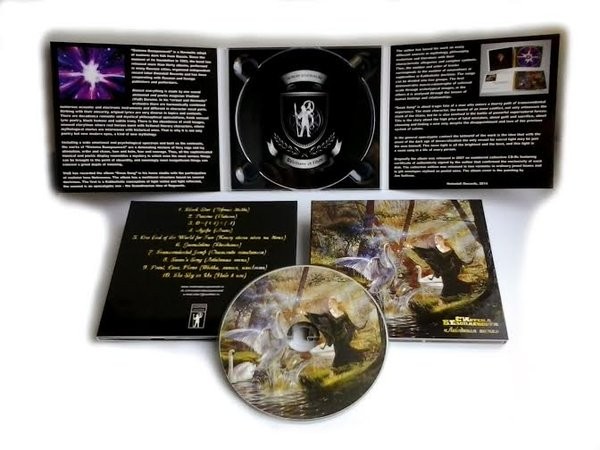 Info: “Sistema Bezopasnosti” is a Hermetic adept of esoteric dark folk from Russia. Since the moment of its foundation in 1993, the band has released more than thirty albums, performed in many Russian cities, organized independent record label Heimdall Records and has been cooperating with Russian and foreign publishers and performers. Having undergone many stylistic transformations, today “Sistema Bezopasnosti” has proven to be one of the brightest Russian representatives of such music styles as esoteric dark folk, neoclassic and dark ambient. “Swan Song” is the new release of the band. It is a gift limited reissue of the album released in 2007, which is one of the most expressive and moving works of the “virtual and Hermetic orchestra”. Created in romantic aesthetics of decadence, the album demonstrates great taste, sense of style and subtle irony of its author despite the gloomy apocalyptic tones. It is emphasized by characteristic emotional ecstatic vocals and original poetry that keeps with the best traditions of Russian symbolism, classical mystical prose and heroic ballads. All the songs are diverse in their subject and contents. All of them have their own storyline, but at the same time they are united by one idea, which makes the album conceptual and allows to apprehend the album on different levels. Poems contain many references to the works of art, films, literary sources, etc. Using the terminology of postmodern, we can say that the album is full of allusions and “dormant” meanings, it shows great erudition and contains a deep subtext, thereby attracting intellectuals. Musically the basis of the work is mainly neo classical, orchestral, symphonic and folk music, with airy-weightless ambient aftertaste and small air of jazz. The album will be of interest not only for lovers of dark folk, but also for other connoisseurs of dark aesthetics, including the Gothic admirers. Thus, the “Swan Song” is a luxurious veil woven of many sounds, all kinds of voices and instruments, archetypal images and symbols, different mythological and real characters who walk by and then again hide behind the curtain of time. Thus the Gothic gloom envelops reality and bodiless spirits gain strength and appear among us. Thus the mysterious world of the occult knowledge aggressively invades the material world, mercilessly destroying its rationality. Thus the sorcerers and shamans passionlessly observe the vanity of the world, and the gates of wisdom open for the initiated. Thus the hero is rewarded for loyalty for his vocation with the inspiration which coins alchemical gold. Anyone who is familiar with the works of “Sistema Bezopasnosti” will enjoy all this to the fullest, and for the others it is a wonderful opportunity to plunge into this different magical world. And remember: don’t be afraid of the Dark, but be afraid of the things it hides!