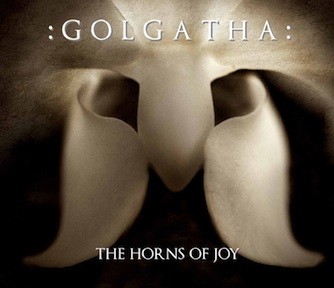 Info: Founded in 2004 as a dark ambient band, managed the German formation: Golgatha: to cultivate over the past few years through a series of demanding concept albums and live performances a unique style, which they themselves as, ritual folk called ': Their idiosyncratic fusion of percussive world music elements with ethereal female vocals and earthy folk songs evokes the spirits of DEAD CAN DANCE IN tHE NURSERY and JOCELYN POOK as LEONARD COHEN, SOL INVICTUS and CURRENT 93 Sounds entrückender Beauty encounter dark and pessimistic visions of ecstasy. Horns of Joy 'is the nihilistic tendencies of the early 20th Devoted century - and the necessary overcoming.

Following the successful recent album "Tales of Transgression & Sacrifice" (2007) and the neoclassical symbiosis with French colleagues DAWN & DUSK ENTWINED to "Sang Graal" (2008), called "The Horns of Joy 'a new chapter, a next stage in the development of: Golgatha:. "The Horns of Joy" is serious and mature, ambivalent and profound, without exhausting yourself in the aestheticized darkness.

According to previous creative collaborations with SIXTH COMM, TONY WAKEFORD HERBST9 and was called in for "The Horns of Joy ', the vocalists of DAWN & DUSK ENTWINED and WHILE ANGELS WATCH as guests on board and created unique hymns of the great disasters of the 20th Century: "This is the sound of war - what has it all been good for" Slowly increase trancy rhythms, giving the way for songs of guilt and pain, but also hope and joy.

: Golgatha: have with "The Horn of Joy" pulled the sum of their previous work and developed their original ritual-folk sound in crystal clarity on a cycle of 13 sophisticated songs. They prove to impressive way their special status in the alternative European music scene..