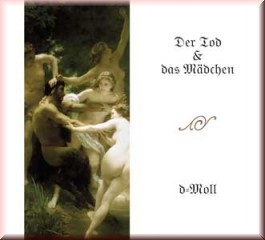 Info: performing together since 2009 and now present their debut. The album "D minor" is a musical anthology of some long-forgotten poet since Goethe's death. The 19th edition of the -Century laments deal with the pain and the grief of a lost loved one through death. Transience and melancholy, longing for death and madness, dreams and reality are emerging from these thoughts, make their own priorities. The era of Romanticism, especially the undercurrent of black romantic look closely these motifs, which are to be placed on the album "D minor" expression. Inspired by composers of the Romantic era to the extinct poetry will be accompanied by a melancholy and gloomy Tonwerk using the piano. An exception is the song "You orphan house" with a composition by Carl Philipp Emanuel Bach, which expresses on the instrumental level, prematurity of the classical era. But C.P.E. Bach deserved during his lifetime, the fate of the shadowy composers through the truthfulness of his father. The final words of Kaiser Wilhelm the Second from 1904 form the finale of the CD with the counter asked question regarding the presumption of the individual, because "the world is so big and we humans are so small, because not everything around us alone turn. "