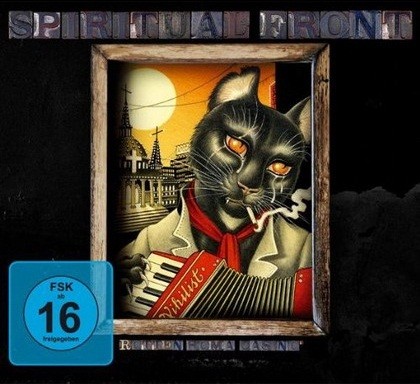 Info: The "Armageddon Gigolo" is back: After succinctly titled first album on the Italian band Spiritual Front Trisol defined by the charismatic heartthrob Simone Salvatori on this album once again what has shaped them like no other: Suicide Pop. That is, melancholic melodies, rousing guitar chords, emotional vocals and languorous string passages, but also groovy beats and macabre twists.

Was the bill to "Armageddon Gigolo" already worked out perfectly and had defined the genre on its own, is "Rotten Roma Casino" decisive step further: Again they called together the best ensemble, which also includes chamber music from the world of legendary film composer Ennio Morricone belong, and created a whole series of musical gems, which you can no longer escape after one hearing. Under the title it is about Rome - a metaphoric, decadent Rome, however, the equivalent of the "Roma" Fellini, full of wonder, monstrosities, and passions. It pays homage to the orgiastic, wild and the ambiguous in a way that especially in the intense video clips, which are included on the bonus DVD summon the immortal spirit of Rainer Werner Fassbinder. At its homoerotic melodrama "Fox and His Friends" is oriented the deeply sad "Sad Almost A Winner", while the clip for "Dark Room Friendship" to the promiscuous, bisexual passion of the front man worships Salvatori. Skin shimmering in the twilight - a friendship made of flesh and lust. " Without Fassbinder's controversial sex-and-death drama "Querelle" he would probably founded Spiritual Front never admits Salvatori. This harmony, to flow directly from the legendary film scores of Nino Rota and Ennio Morricone seem. Spiritual Front with its distinctive Italian spirit in the postmodern era.

Shake On "Rotten Roma Casino" Spiritual Front aware from its underground roots to invent their very own brand of morbid folk-pop, indie rock, acoustic chords and tango to a new, intensive, mainly linking heartbreakingly sincere mixture. In a varied series of romantic, lively, cynical, sad and sometimes cruel ballads we dive unparalleled in the world of Spiritual Front: "Kiss The Girls And Make Them Die," it says, like "Sad Almost A Winner" or "Cold Love (In A Cold Coffin) ". The libertine is still the little brother of Elvis Presley: Hellvis. Aurat with timbre in his voice, he sings again of the impossibility of love and the pain they leave behind. Love, is supposed to be heard, taste (also) to death ...

"Rotten Roma Casino" is as fresh and original as well as a mature musical work in dignity, without compromise, yet catchy, sweet yet disturbing. In any case, the redemption worthy of the promise that "Armageddon Gigolo" once was. Suicide Pop in its purest form ...