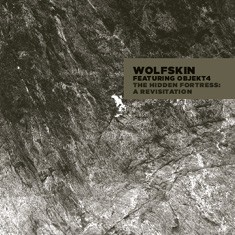 Description Evaluations 0
Description
Presented in an elegant 6-panel digipack and limited of 1000 copies. Info:Wolfskin is one of... more
Close menu

Presented in an elegant 6-panel digipack and limited of 1000 copies.
Info:Wolfskin is one of Europe's finest and most original ritual ambient acts. Over the years they, along with their partners of Forgotten Blood, are surely responsable for putting Portugal on the dark-ambient map. 'The Hidden Fortress' is both their first and last output: originally released as a cassette tape back in 1995, Johan Aernus decided to close the Wolfskin circle with a remastered and partially re-recorded edition of that same record. On his last journey to the hidden fortress, he took a companion with him: Swedish audio-genius Objekt4 gave the whole record a new life & dynamic. This record was years in the making, no risks were taken to prevent this from becoming a worthy testament for one of the most exciting dark-ambient acts Europe has known.