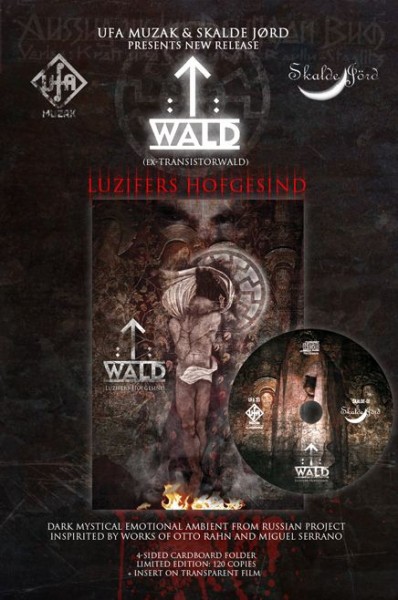 CDr 4-panel A5 digifile with transparent film insert, limited to 120 handnumbered copies.
Info: The new album of the project hiding behind the new mask, but not losing the mystic connection with the mythological codes of the North. In this new album the author's talent discloses the themes of authors-avatars of occult researches of the origins of "forbidden magical belief". Sounds that seem infinite flow, but they can't fill up the magic cup reflecting sunrays with gold. It exists, and at the same time it's just an illusion used to braid the false myth to protect the truth from pharisee's hands. T-Wald invites to visit its artificial forest maze, but the golden thread of Ariadna is too thin to follow it and find the way out escaping the face of the Beast. This is an action where meistersang, creator of this sound lithography of the sacred Lucifer, makes hommage by concluding the vassal agreement between this and the other worlds. Slowly, silently falls the curtain, but before that important things should happen, don't miss them.