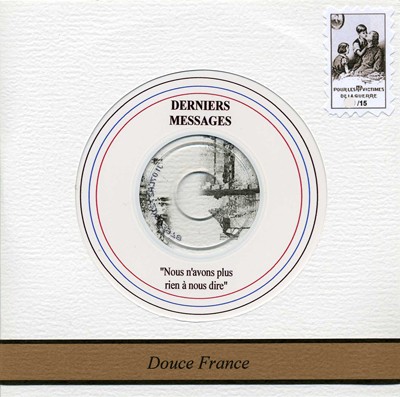 CDr comes in White cover edition with stamp, Die-cut folded sleeve sealed w/ banderole + two b&w squared inserts - RARE!!!
Limited handnumbered edition of 15 copies
Info: These days there are celebrations for the 60 years since the June of 1944 Normandy landing, which give a perfect occasion to listen to this record. "Douce France" is a hard judgement on the Allies and their bombings on French cities in the 1940s. The first side opens with a report on death and damage caused by the bombs, with voices talking about house destroyed, civilians killed and other disasters. While they talk, a subtle, frightening noise starts to rise, turns louder and louder, resembling the roar of bombers' engines. All of a sudden, a deep, obsessive, percussive noise explodes, like bombs being dropped all over the place, and all hell breaks loose. This is Les Joyaux De La Princesse's most effective and frightening record, if you play it loud you actually feel like being under a bombing. And it's not a pleasant sensation at all...