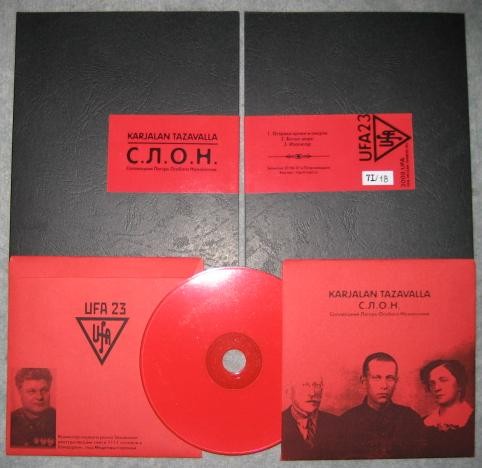 Description Evaluations 0
Description
CD , 37 minutes,handnumb.limited of 71 copies Info: external envelope is from black cardboard... more
Close menu
CD , 37 minutes,handnumb.limited of 71 copies
Info: external envelope is from black cardboard with the invoice under leather + sticker, internal envelope is from red paper .Death Industrial The one from few the most brutal releases of UFA. Analog rough death industrial from Petrozavodsk (Russia). Powerful and cold theme is dedicated to first official genocide organ known as Solovetskiy camp of the special purpose. The black, rough and dead cloth of sound. The buried alive sing the lingering and sad song, beautiful and touching melody flow from tombs of necrological horror rumble and death... It is as if you drink water which poisoned by burial ground. "From many tens Soviet concentration camps Solovetskiy under the right could be considered as most severe, and his name covered with terrible glory. Located on islands of the White sea, on a line of a North polar circle, he was torn off not only from all laws of the country, but appear he was mockering and above all laws of humanity. So much life were not lost anywhere, the terror and more frankly arbitrariness was not stronger anywhere than here, anywhere was not more and more helplessly prisoners than on Solovky islands".